Why I Love Interdenominational Ministry

When I started college, I only had experiences in the moderately charismatic, nondenominational, megachurch scene.  I thought I knew what Christianity looked like and thought that was the only way.

Now, being on the post-college side of things, I am grateful that God put me in a place where I did life and ministry with people from a variety of church backgrounds.  I have received so much understanding of different perspectives that I would have never gained otherwise.

There are tons of Bible verses that call the church to be of one accord, to be united, and to love each other.  Besides that though, I love interdenominational ministry because I have learned to love to learn, and through my friends who are from different backgrounds, I have learned so much.

In college, God led me to an interdenominational fellowship, and what I first noticed was that people prayed differently than I did. At churches I grew up at, people prayed loudly, with many inflections in their voice, with extreme emotion, sounding as though they were just one “Ooh Father God” away from tears.

When my more conservative friends prayed, I was shocked.  These kids sounded like they were just talking normally, like to a friend. They sounded like themselves.  I immediately thought, “Do they even realize we started PRAYING?!  *GASP* Some of them even have their eyes open!!  Do they have any passion?!”  Yes, eighteen-year-old Ashlye, it just looks different.

I soon realized that when I prayed I wasn’t myself, I wasn’t actually talking with God intimately, and I was just praying words that I heard someone else say before that I didn’t mean or understand. I learned from my friends’ prayers though, that we are supposed to pray authentic words from our heart that we would actually say in real life. If God knows our thoughts and everything about us, then why do we come to Him as different than who we usually are?

So maybe you do normally talk loudly and passionately with lots of inflections, or maybe you’re calm, soft-spoken, and only use a few words at a time.  Whichever one we are, that’s how we should pray.

A Love of Scripture

Many of my friends in my college fellowship, were a part of the Plymouth Brethren church background, which is very different than mine in that they take scripture super seriously, not just the words, but the stories and the context as well.

My friend Amanda for instance, is someone I love to learn from.  If I have a question about a Bible passage, she can usually tell me what was happening culturally during the time the passage was written, why that person wrote what they did, and maybe even what some of the words originally said in Greek or Hebrew. Amanda can answer questions I have, not only because she studied some scripture in college, but also because she had a foundation to value scripture. Being around her and others made me thirsty to read the Bible more.

As American Christians, it’s easy to get caught up in believing something just because it’s what we’ve been told.  Scripture though, should be the basis of everything that we think and we need to have sound theology, which is why it’s important that I learned to value scripture from my friends.

My best friend, Laurelin, is Catholic, and I had been to Catholic Church a few times growing up, but I never understood many aspects of it.  Through Laurelin, I have learned how beautiful the Catholic faith is.

When I’ve gone to Mass with Laurelin, I have felt the Holy Spirit’s presence so strongly through the reverence that fills a Catholic service. By reverence I don’t just mean obedience, but complete awe of who God is. We are so undeserving of His love, yet He gives it to us freely, which is something that the Catholic Church displays so well.

Laurelin’s prayer life is one that I respect because she takes everything she goes through before God and never, ever, forgets to pray for a meal, showing just how deep her relationship with God is and how grateful she is for what He’s given her.  I have learned from Laurelin to be more reverent, and now know God, not only as my Father and best friend, but also as my King and Lord.

The Other Side of the Spectrum

I have learned from doing ministry with people from more traditional backgrounds, but what about friends I have that grew up in even more charismatic settings than I did?  Those friends aren’t left out, as they have taught me boldness and how to better listen to God.

I love that these friends look at everything from a spiritual perspective, how they’re quick to answer to God nudging them to talk to someone about Him, and how they are so in tune with God’s voice.

In school, we’re taught to immerse ourselves in a broad spectrum of activities and subjects to be more well-rounded people, and I think the same should happen in our Christian walk.  When Jesus says we “must worship in spirit and truth,” I feel as though that speaks of His desire for us to have a well-rounded and balanced faith.

I’ll probably always lean towards the more charismatic side of the denominational spectrum, but now when I look for a church, I don’t only look at who has the worship music that I can connect with the most emotionally; I also look for which church preaches straight from the Bible, which values mission, and which is made up of people who are authentic in their faith and towards each other.

We are all from backgrounds that are different and we’ll probably always lean more towards one side than the other and won’t ever agree on everything.  However, if we let those small things get in the way of us trying to develop friendships, to see others’ perspectives, and to work together, we are missing out on a huge opportunity to learn so much that God might want to teach us and might want to grow us in. 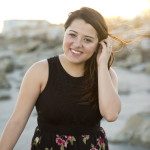 Ashlye is the Public Relations manager for Campus Renewal and a recent graduate of The University of Texas. She enjoys discussions on racial reconciliation, authentic Christianity, and the parallels between evangelism and PR.  Ashlye is engaged to Steven, a fellow Campus Renewal staffer, with whom she loves going on adventures and doing ministry with.