“…Who can withstand His icy blast?” I paused my reading of Psalm 147 to let out a guffaw as my shaking hands testified with the Scripture.  Trying to steady my hands so I could read from the snow-dotted iPhone screen, I continued with verse 18, “He sends His word and melts them; He stirs up His breezes, and the waters flow.”

“May it be, Lord!” Cried my cold-bitten fingertips in response.  Yet as I finished reading the Psalm and looked at those huddled around me to pray outside on that sub-freezing Thursday, I did not wish I were anywhere else.  We were gathered at The University of Texas at Dallas to observe the 200th year (roughly) since the Collegiate Day of Prayer was started in 1815 by praying that God would bring transformation to our campus, and he sent us a nice, Texas, icy blast (meaning less than 30 Fahrenheit in the morning and less than 40 all day) to keep us company!

Present your Requests to God

We continued to pray after this Scripture reading, with praises, petitions, thanksgiving, confession, repentance, worship, entreaty, invitation, adoration, and chattering teeth.  We prayed that God would let Himself be praised more on college campuses, that He would let His kingdom come with all it entails, and that He would let His church do His will across the nation and world via the next generation of world leaders who were currently our college peers.

Then, as we closed out our hour with the Lord, we saw precious reinforcements appear on the horizon – or rather, emerge from around the corner.  We were thankful to be relieved of our station by another Christian ministry who had come to take up our prayers to the throne room of God.  Meanwhile, we each went our own way (mine was to the closest door inside to warm up), with the full assurance that our God would be given no rest that day, that He bring revival to all college campuses across the nation but most of all for our own dear University of Texas at Dallas.

Throughout the day, ministry after ministry came to face the cold for the sake of being together and allowing Christians who were passing by to join us in prayer for two minutes or two hours.  Despite the fact that UTD had been shut down due to ice that week and that (for a Texan) the weather was still ugly, more than 70 people came to endure the cold and, more importantly, pray together that God would do what only He can.

This was such a fantastic picture of what it looks like for Christians and Christian ministries to share their loads so that they can accomplish more together than they ever could alone – one ministry could certainly not have brought 70 people together in such weather to pray to the Lord for 12 hours straight, yet together this was doable.

Where Two or Three Gather in My Name

I pray that ministry leaders (student or staff, collegiate or otherwise) across the nation will learn from this that when we come together, we are able to offer more to the Lord, ask Him for more, seek Him longer, repent of more, and ultimately see a greater response than we would alone. 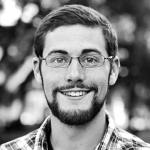 Charlie is a new addition to the Campus Renewal team, coordinating ministry work at The University of Texas at Dallas, where he graduated with a B.S. in Electrical Engineering last May. He is newly married to his high school sweetheart and enjoys reading and practicing speaking German in his spare time.