The College of William & Mary was chartered in 1693 and has rich history embedded within its well-worn brick pathways and aged brick buildings. It is said that students who go to William & Mary enter in with aspirations of changing the world and leave with the ability to do so. Within the nation, the university is known as an academically rigorous “Public Ivy League” and a very liberal school. By most people’s standards, revival and Williamsburg, Virginia are two of the last things that would ever go together.

And yet, God is moving.

The Beginnings of a Movement

“It’s quite difficult to describe how exactly this got started on our campus, simply because it’s difficult to describe what exactly this is,” says Jena Gray, a junior at William & Mary. “The best I can do is say that this is a very clear move of the Lord and that joy and freedom are racing each other throughout our campus, laughing the entire way.”

Though she has been a Christian for many years, Gray says she only truly began following Jesus during the second semester of her freshman year. Since then, she says the Lord has directed her heart towards her campus and she has been praying for revival, freedom, and joy for about a year and a half. Sophomore year, she says, felt dry and barren and much like a season of “pruning”. But this semester, things started to change.

“The state of Christianity on our historic campus has been viscous to the onlooker, seemingly stagnant but upon close scrutiny, there was movement – slow and steady,” Gray says. “Yet like all viscous liquids when heat is applied, energy increases, and similarly, the fire of the Holy Spirit has been fueling a movement and the flow of Jesus-lovers has been pouring out into all areas of the campus this semester.”

Worship, Prayer and Everything In Between

According to Gray, many opportunities for united worship and prayer have been springing up on the William & Mary campus. On Wednesdays at 9pm, students gather together in one of the campus buildings for “Worship Wednesday” – a gathering where Christian students can meet, worship and pray together. Birthed out of a prayer night held in March 2014, “Worship Wednesday” launched last Fall and has since become a weekly event that many students look forward to.

A partnership has also formed between W&M students and students from Christopher Newport University, a neighboring campus about 25 minutes away. “One Sunday night I called up one of my friends at Christopher Newport University,” says Gray. “I asked John if he or anyone from CNU could lead worship the following night at 8pm and Monday evening, 9 CNU brothers and sisters showed up. It was a beautiful time of worship with 9 CNU students and 10 W&M students in my friend Catherine’s living room.”

Gray believes God is working to cement the relationships between CNU and W&M students. “I was overwhelmed by how much God wanted this to happen and by how much of a bond [Christian] brothers and sisters have – that these friends and Jesus-lovers from CNU would pile into two cars on a Monday night to worship with us,” she says.

Gray and her friends have also been looking for ways to be missional and provide alternate settings where Christians can express their faith, while creating a safe place for non-Christians to attend, ask questions and hopefully encounter God.

“Catherine and I began ‘Creative Space’ at the Hearth (the name of Catherine’s house),” Gray explains. “The heart behind having people over to The Hearth is to have an open gathering for those interested in all art forms: poetry, baking, knitting, painting, instruments, and the like; to create a platform through which authentic conversations can be sparked, eventually leading to relationships founded on the commonality of art in order for the Gospel to be shared.”

“Basically, we want to reach the hipsters on our campus,” Gray says with a smile.

Once again, CNU students teamed up with her, and brought art supplies and canvases to The Hearth. But it hasn’t been without challenges. Gray says she found herself disappointed when not as many students showed up as she would have liked. It was on a trip to a local campus coffee house that her perspective started to shift. “As I walked inside the small house entrenched in darkness and despair, I knew this is where the people I most wanted to reach were. I felt the Lord say to me, ‘Jena, how do you expect people to come to you if you don’t go to them?’”

That opportunity soon presented itself on a frigid February Monday night when their regular prayer gathering coincided with a roommate’s party at The Hearth in celebration of classes being canceled the next day.

“Charlotte knew we were having worship from 8pm-10pm but it was fine with her that we were going to worship while her friends were over,” Gray recounts. “As Christian after Christian poured in, the non-believing hipsters poured drink after drink, staying pretty much in the kitchen or on the porch smoking all sorts of things. As our friend Jeremy began worship, everyone was slightly uncomfortable. No one had ever been in a situation quite like that before,” Gray says in bemusement. “All in all we had 26 Christians there worshipping and there were about 15 of Charlotte’s friends in a small house on a snowy night.”

What could have remained an awkward situation soon turned into spontaneous collaboration as one of the non-Christian guys picked up a violin he happened to have brought and joined in the worship. Over the next two hours, intrigued by the worship music, some of the non-Christians drew near to the living room, allowing for spiritual conversations to ensue.

At the end of the night, as the group transitioned to an a Capella rendition of “Nothing But The Blood”, the entire house fell silent. “Absolutely no one was talking but everyone was listening to us singing ‘Oh precious is the Lamb’ at the top of our lungs,” Gray says. “It truly felt as if the strongholds on our campus were being shaken loose from the sheer volume of our voices. Upon the final verse, I closed us in prayer and I distinctly remember not a single sound as everyone, all 40 people were listening to me talk to God about the life, joy, and freedom that is found in Him and how I was praying for our campus to discover those things in Jesus Christ.”

In the last year, Gray has joyfully watched as the Christian community on her campus has grown from her and 2 friends fervently praying for revival to a thriving group of 18 students continuously interceding for the campus. Lives are being transformed, and they have even seen things stirring among athletes as 2 senior football players and a junior female lacrosse player have surrendered their lives to Christ. In total, there are over 300 Christians spread across 14 campus ministries, of which 20 student leaders meet regularly to pray and worship together outside of their regular ministry meetings. According to Gray, the number of students who label themselves as Christians far exceeds 300, but currently, 300 are active members of a church and/or ministry on campus. And Gray is confident that this is only the beginning.

“God is pouring out His Spirit over Williamsburg, and William & Mary will never be the same,” Gray says. “Laughter will replace stress; life will replace suicide; and joy will replace depression. Most of all, Jesus will reign over our campus now and forevermore. Revival is here.” Most recently, Gray has signed up with Campus Renewal, pledging to personally pray daily, pray weekly with others, fast monthly and host an annual gathering on her campus.

“I chose to ‘join the movement’ because God is doing a big work here and any resources that He can provide us through Campus Renewal are vital and will be put to use,” she says emphatically. “Our campus is being transformed by the Lord through prayer and worship so we are joining the movement alongside other believers and other campuses and declaring that the movement of the Holy Spirit is welcome here at the College of William & Mary.” 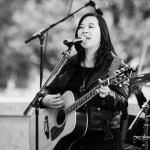 Kimberly Chung is the founder of the National Media Department at Campus Renewal and served as National Media Director for 8 years. She now serves as the Student Leadership Development Director, helping to develop and mentor student leaders who she hopes will impact the next generation for Christ. She is also the editor-in-chief of the Campus Renewal Magazine and enjoys writing and reporting on stories of what God is doing on college campuses around the nation.