What if we were able to interact with God the Father, not just as Jesus’ Dad, but as our own? As his child?

At the end of John 16, things are tense. Have you ever walked out of a conversation and felt the weight of the emotions people were sharing? Well, that’s what this conversation between Jesus and his disciples feels like.  There’s confusion, deep sadness, and maybe even despair.

Over dinner, with the disciples leaning in to Jesus’ every word, Jesus has made a few things clear.  He’s returning to God the Father: “I came from the Father and now have come into the world, and now I am leaving the world and going to the Father” (John 16:28).  He’s also sending a Helper: “When the Spirit of truth comes, he will guide you into all the truth, for he will not speak on his own authority, but whatever he hears he will speak, and he will declare to you the things that are to come” (John 16:13).

Historically, we’re told that each of Jesus’ disciples die a martyr’s death for the cause of Christ. John, for example, the author of the book, is exiled to an island.

The Best Pep Talk Ever

Jesus speaks to this when he uses the word tribulation in John 16:33. The root Hebrew word for tribulation is ṣārā, and the word in its entirety communicates a severe constriction or pressing together.  Jesus knows these men are about to enter a type of pressing together that they’ve never experienced before. This is why he’s walked with them, loved them completely, and is about to lay down his life for them. Before he does that though, he’s preparing their weary hearts for a hope that’s greater than anything they’ll face in the future.

“In that day you will ask in my name, and I do not say to you that I will ask the Father on your behalf; for the Father himself loves you, because you have loved me and have believed that I came from God.” (John 16:26-27)

Jesus is referring to the time after his resurrection when he says, “in that day.” Why does Jesus tell these men that they’ll have the Father’s love? Is it because of what they bring to the table, their talents and abilities, how many Bible studies they led or were a part of, the wording of their prayers?

These men will be loved by the Father because they loved Jesus and believed that he was and is the Son of God.

In the trenches of some of the most terrifying experiences imaginable, Jesus, who could have said anything else, points them, and us, to their unrestricted access to God the Father as their own.

In my own life, God has been gracious to help me get up and bring myself before his Word. I’ll read, journal, and then pray. After that though, I have a tendency to go about the day without exercising all of the benefits of the relationship I now have by grace through faith.

Whether it’s setting an alarm sometime in the day to stop and pray, turning off the radio and praying as we drive, pulling up God’s Word on my phone instead of Facebook, whatever it may take, I try to exercise that unrestricted access to God that He has blessed us with.

Jesus doesn’t just suggest that we should ask him for what we need, but he commands us to (John 16:24).  So how can you begin to incorporate little ways throughout the day to exercise the unrestricted access to God that you have? 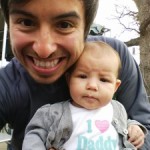 Vinnie Casanova helps lead the Lone Star Epic Team in Austin, TX. Vinnie is husband to Kimberly, the most beautiful, gifted woman he knows. He is also the proud, and often frantic, father of Clara, his second sweetheart. He has been on staff with Cru since 2007. He’s passionate about running, drinking good coffee, teaching God’s Word, and developing leaders who want to see The Great Commission fulfilled in their generation. For more information on Epic Movement visit: www.epicmovement.com. To contact Vinnie, email vinniecasanova@gmail.com.