I remember the words spoken over me a few nights before I left home for my freshman year here at the College of William & Mary. “Pioneer”, they spoke over me.  A group of older brothers and sisters who mentored and discipled me throughout my youth prayed over me to prepare me for my years college, though, I had no idea that God would move in the ways that He has.

I moved into my freshman dorm on a grossly humid day in 2012, and the fact that I was a university student didn’t truly hit me until the first night I slept in my bed that the school provided for me. “Welcome home” I thought and, like many freshman that night, I felt very far from it.

I’d like to say I then transitioned smoothly into university life and walked faithfully in the prayers of my older brothers and sisters and the promises of God. I’d like to say this journey was always filled with sunshine with maybe a few rough patches along the way, I’d like to romanticize this journey and make myself look like a champion for Christ. The truth is though there have been more awful days than I’d like to admit. There were many more lukewarm days than I’m comfortable with sharing.  There were so many times I’ve crept away in fear because sometimes I can’t even believe the Lord is using me this way.  I was just another college student with a vague idea of the world, entering into a radical promise given by an enormous God. I was in for a wild ride.

Freshman year was mostly me trying to find community and figuring out how the prayers spoken over me were supposed to materialize. “Pioneer” has always stayed in the back of my mind, and many times I wondered why I tried so hard to fit into those prayers. Over the course of the year, God was pruning me, helping me grow to have not just the skills to facilitate gatherings or lead worship, but to have a heart sanctified and hungry for God’s plan to come to full fruition.

One night right before I went to sleep, I felt a tug on my heart that I knew was of the Lord. The name Daniel kept popping into my head and was preventing me from falling asleep, which is hard to do because I fall asleep very quickly. I knew the Lord was prompting me to read the book of Daniel, so I got up in the dark and made my way to my desk to open up the Bible. As I read, I began to understand the promises of the Lord more and more. Daniel and his friends resolved to stay faithful to the Lord in an environment of hedonism and idolatry, and God radically blessed their steady faithfulness. Daniel and his friends were pioneers in a strange, new place. For the rest of my freshman year, that became engraved into my heart, and I began to make new friends from different parts of campus as well as other regions.

The following Summer, I attended Hillside Intensive 2013, a worship school in Harrisburg, Pennsylvania, where I spent 21 days in radical community with over 90 fiery worshipers. To make a long story short, this school was life changing, and I was ready and fired up to jump into the Fall semester.

In the Fall semester of 2013, I immediately began to see the fruits of what God was doing. He connected leaders from over ten different ministries into unity and we organized a 12-hour worship night that went from 8pm to 8am. We connected with brothers and sisters from Liberty University, Christopher Newport University, and the Fredericksburg Prayer Furnace who all came to lead a two-hour worship set and to help build a movement of unity at William & Mary. It was a move of God like no one had ever seen before at the school.

It seemed that God was finally bringing revival through answers to the many prayers of those who came before us. Many more events of unity followed afterward and small pockets of friends praying have grown into communities founded in Love and Truth. Quiet, gloomy Williamsburg was entering into a season of Life. For many of us, we as a William & Mary community began to not only trust that God simply exists, but we began to trust in Him and trust His promises. He is truly worthy of all the praise and glory!

Over the past year, God has been connecting more and more leaders together, both within the campus and across campuses, as well as strengthening those relationships. We have held prayer gatherings, worship gatherings, seen moments of extravagant blessing and persevered through seasons of intense dryness. Today, we are plowing the ground for an outpouring of God’s presence on our campus. We walk hand in hand with our brothers and sisters at other universities and truly believe that revival is upon us. Our hope and prayer is that His Kingdom would be fully realized on our campus and in the world, that the lost would be saved by the grace of our Lord Jesus Christ, and that our ceiling would be the floor of students to come when we’re gone. We are simply one part of His intense and glorious story.

God is much bigger than my story. My story is only a fraction, a crumb, a single shade of the radiating spectrum of color God has painted this story to be. I am like a small child learning to write, I know not the words that come next. 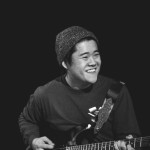 Jeremy is entering into his senior year at the College of William & Mary. He is passionate about music, food, and people, and he is committed to seeing Jesus made famous on the college campus.