There was no head-chair and no speaker to carry the floor; we were equals in a collaborative circle. The only sign of guiding was the girl who sat at the piano bench, strumming her guitar as she sang the first of that night’s worship songs.

Each attendee represented a different life, a new story, and a whole world of perspective that somehow differed from each other person in the room. Being that we were all Christians, we certainly had our similarities, but within that context of our common religion, multiple denominations were represented so that no one carried themselves exactly the same.

When worship ended, a time of prayer began and each person found their time to pour out the worries or praise that yearned for expression. Prayer eventually turned to conversation as ideas bounced contagiously back and forth, and experiences became the stories to affirm or question each thought.

Each of us has settings where it is easiest for us to learn.  For me, one of those settings is that which I’ve portrayed above. Specifically, this night was a time of worship and discussion with the members of the Campus Renewal Core Team in Austin, Texas, but the scene could have been placed to many other experiences I’ve had with different people, at different places over the course of the last half-decade.

Being one who has attended house churches steadfastly for the majority of the past five years, I‘ve found myself increasingly drawn to settings where each person has equal opportunity for involvement. But as I’ve attended more of these gatherings, I’ve realized that the factor most involved in drawing me back to each new meeting has less to do with my opportunity to speak, and much more to do with my opportunity to listen to diverse opinions as they are contributed to a common topic.

Listening is the freedom to be curious about what others know and have experienced. It is the humility to enter conversation without having all of the answers.

The older I become, the more I see the significance in what others have to say, and the more I seek opportunity to hear the perspectives of those around me. There is a notion behind the characteristic of being an independent person that often paints a picture of someone who exists as a one-man-show with no need for that individual’s life to be contributed to in any way. But mature independence gives room for us to acknowledge our need for one another, and to discover that we can’t fully know ourselves outside of community and openness with others.

Listening is the fruit of our curiosity, and the information we garner for this curiosity can mature each of us to see the world with increasing light. Whether listening means frequenting gatherings like the one mentioned above, popping headphones in to hear an engaging podcasts, reading books on topics you’ve never explored, or simply grabbing coffee with a friend with the intent of gaining understanding of that person’s perspective, the key  is not how many voices are speaking around us, but how curious we are to know what is truly being said.

Never lose the wonder that the admittance of mystery provides. Each day, every place, and every person is a teacher waiting for an attentive student, so be the curious learner who will glean from their greatness. 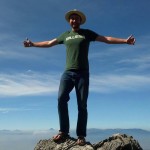 Alex Lewis is the Publications Manager for the nonprofit, Beautiful Feet. After 10+ years of enjoying the beach-life of Southwest Florida, Alex recently transitioned to his new home in Austin, Texas, where he writes for the occasional journal, partakes of frequent cups of coffee, and enjoys the company of his new friends as they explore the endless joys of their beautiful city. To enjoy more of his writings, you can follow Alex at www.facebook.com/alexlewiswritings.