“Go therefore and make disciples of all nations, baptizing them in the name of the Father and of the Son and of the Holy Spirit…” Matthew 28:19

I was brought up in church hearing this passage time and time again, picturing myself picking up a suitcase and heading off to distant cities where people lived waiting to hear the good news of the Gospel. I would imagine the disciples dropping what they were doing (everything from catching fish to collecting taxes) to follow Jesus. And while this is exactly how some individuals are called to respond, a friend’s story recently challenged my perspective on just what it means to “go and make disciples” and provided me with a clear picture of how we can fulfill the Great Commission no matter where we are.

A fellow Kennesaw State University student and good friend of mine (let’s call her Anne) recently shared with me exciting news of a conversation she had in the campus dining hall. Anne is part of the nursing school here at KSU which is not only very selective but also extremely demanding on its students.

Nursing students spend more hours studying than anyone I know, and it seems as though every week they are faced with impossible tests that in some way or another seem to determine their future and life as they know it. Through nursing school, Anne met a friend (let’s call her Jamie) and they became study partners.

I recently received a text from Anne saying that she had an opportunity to share the gospel with Jamie! Anne later explained that through spending hours and hours together studying, they had developed a sweet friendship, and it was during a 9-hour-straight study session in the dining hall that Jamie began bringing up deeper questions of faith, allowing Anne to share the good news in detail.

Anne described how they had talked about their beliefs and dove into Jamie’s continuous stream of hard, well-thought-out questions for about three hours. Jamie had never before heard the gospel presented clearly.

I’ve heard Bible scholars teach before on how the phrase “Go and make disciples…” can actually be more accurately translated to say “As you are going, make disciples.” I want to challenge you with the idea that, although sometimes the Lord calls us to give up everything and serve as full-time evangelists, and oftentimes calls us to just be missionaries where we already are. My friend Anne recognized that she is called to be a nurse and that this means hours pouring over her books, but, by investing fully in that calling and in keeping her spirit tuned in and her eyes opened to the people around her, God is using her to spread the gospel.

I have countless stories of friends who are living this out in their own lives as well. A friend in the military uses his platform as a platoon leader to tell his troops about Biblical concepts through military terms. Another friend makes a special point to get to know his waiter at restaurants and asks if he can pray for them before he leaves. I know a girl who uses her role as an RA to speak life into hopeless situations, and another girl who tells Bible stories to the children she babysits, and the list continues.

The thing is, God has already placed callings on our lives. He has given us talents and bents towards certain jobs, activities and social groups. This is the first part of the Great Commission; like Anne, we are already “going.” The only thing left is the “making disciples” part: the gospel-sharing, the mentoring, the supporting, the reaching-out-to-the-people-already-around-you part.

As we are going, as we are making disciples, as we are looking to reach all nations with the good news of Jesus Christ, may the Holy Spirit guide our thoughts and our conversations so that we do not overlook the need for hope in our own backyards. 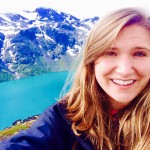 Liza is a senior studying International Affairs at Kennesaw State University in Georgia.  She loves music and traveling, and sharing the hope and boundless love of Christ with the people she encounters through these platforms.