“All these died in faith, without receiving the promises, but having seen them and having welcomed them from a distance, and having confessed that they were strangers and exiles on the earth.” – Hebrews 11:13

I believe that this is one of the most powerful verses in Scripture. I am simply amazed at their faithfulness and perseverance. They saw the vision from God, and even if these promises were not fulfilled in their lifetimes, they died believing they would come to pass.

Hebrews 11:6 states “without faith it is impossible to please Him.” Faith matters to God. The question is, will we have faith in the promises He has given us?

I came back from a mission trip where the Lord broke me. I did not see revival as I had hoped, but I had fallen into a sinful lifestyle that shattered my pride. But I slowly came back to Him, offering my life on the altar, and I had a vision.

The Lord initially showed me Harvard University, and how it was once a seminary that trained and sent out ministers. He then showed me all the colleges in Boston and how He desired to have the colleges return to Harvard’s original purpose: for students to break out in revival and be sent to the ends of the earth to finish the Great Commission.

An Untested Faith is a Weak Faith

The Lord tested my faith immediately after I received that vision. I felt the calling to start a house of prayer at Northeastern University, but after a few months people grew disillusioned and stopped coming. Many friends even opposed the idea of a house of prayer.

My zeal for my campus began to fade, and the only things I had left to cling onto were His promises.

The Lord had promised me He would bring revival to Northeastern and to Boston. I would take those promises and remind Him, like in the intercessory prayers of Ezra, Nehemiah, and Daniel, remembering verses of persistent prayer (Luke 18) and how God rewards those who seek Him and His Kingdom (Hebrews 11:6).

I’ve learned through my experiences and, most importantly, the Word that we must grasp the vision of who God is – know the upward vision of His Holiness that leads to the inward vision of the transformation of our hearts, that ultimately results in the outward vision of contending for lost souls.

Let Us Be Found Faithful

I still have not seen the full manifestation of His glory on my campus or in Boston, but I am eagerly praying for it. I have seen houses of prayer planted on other campuses (Berklee and MIT), and through His grace we are starting prayer meetings with students gathered from all over Boston.

Even if Northeastern has been a slow grind, my desire is that I, along with others, would be found faithful till the end. The Lord gave us all a great command to take the Gospel to the nations to see His triumphant return. Let us have faith that we will see it completed in our day, or die believing so. 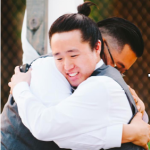 Peter is currently a 5th year pharmacy student at Northeastern University. He encountered the Lord as a sophomore in college. His desire is to grow in love, purity, and hunger after the Lord, and His vision is to see another Great Awakening and Student Volunteer Movement that leads to the return of the King.