During Rez Week at The University of Texas at Austin, for an hour in the prayer tent, we broke up into groups and prayed with people from different ministries. As I sat and listened to the students praying before me, I couldn’t help but smile. Every one of our prayers sounded rather different. The way we referenced God: Father, Lord, Savior, Jesus, Abba. The way we postured ourselves: heads bowed, heads lifted to the sky, eyes closed, hands open. However, they were all prayers full of praise and petition. They were prayers lifted to the same God and understood by the same God.

So why attempt to limit a boundless God?

Unity Across Campuses of the Nation

Here’s what students around the country have to say about the impact of unity in the Body:

“Unity is important as Christians on campus because, although we come from different denominations, backgrounds, and even personality types, we are all on the same team. Our goal should be nothing other than spreading the good news that although we are sinners, we have been accepted into the presence and family of God because of Jesus’ perfect life, death and resurrection.”  -Jennifer Bruskas, Texas Tech University

“Auburn has a pretty big population of believers on campus, but an even bigger population of people who either don’t know the Lord at all or who think they do, but aren’t walking in a life-giving relationship with Him. Unity in the Body of Christ on our campus is vital to the mission of seeing Auburn’s campus won for Christ. Any army is going to be more powerful if its members work together, instead of working separately (or even against each other). Because we have received life through the same gospel of grace, we can receive more encouragement and give God more glory when we are united together as one.” -Cameron McLain, Auburn University

“At a school where Christians are the minority, it’s important for the brothers and sisters in the faith to be strong, encourage, and build one another up. Community is a key piece of personal discipleship that at a school like UNT, you really have to cherish and be thankful for.” -Christian Sandlin, University of North Texas

“I think unity in the Body of Christ is important on my campus because, first and foremost, that is how the Will of God will come to fruition at UK and in Lexington; via the hands and feet of Christ. A. T. Pierson says, “There has never been a spiritual awakening in any country or locality that did not not begin in united prayer”. The push to share the Gospel is far stronger when it comes from a united front, rather than a tangled lattice of individuals or small groups. A tangible sense of the unity of believers is paramount to spreading the love of Jesus across the Bluegrass. And I believe that when God’s people gather together in Him, he is all the more glorified.” -William Downer, University of Kentucky

Biblical Truth on the Matter

The Bible also is not short on verses that emphasize the importance of unity:

“I appeal to you, brothers, by the name of our Lord Jesus Christ, that all of you agree, and that there be no divisions among you, but that you be united in the same mind and the same judgment.” 1 Corinthians 1:10

“Behold, how good and pleasant it is when brothers dwell in unity!” Psalm 133:1

“…Remember that you were at that time separated from Christ, alienated from the commonwealth of Israel and strangers to the covenants of promise, having no hope and without God in the world. But now in Christ Jesus you who once were far off have been brought near by the blood of Christ. For he himself is our peace, who has made us both one and has broken down in his flesh the dividing wall of hostility by abolishing the law of commandments expressed in ordinances, that he might create in himself one new man in place of the two, so making peace, and might reconcile us both to God in one body through the cross, thereby killing the hostility. And he came and preached peace to you who were far off and peace to those who were near. For through him we both have access in one Spirit to the Father. So then you are no longer strangers and aliens, but you are fellow citizens with the saints and members of the household of God, built on the foundation of the apostles and prophets, Christ Jesus himself being the cornerstone,” Ephesians 2:12-20

The Wall Has Been Broken

Jesus Himself broke down the dividing wall of hostility. He reconciled us to God in ONE body through the cross. We, who were far off, are drawn near. So, friends, we are no longer strangers- but we are fellow citizens of the household of God. Let’s pray for that unity to abound. 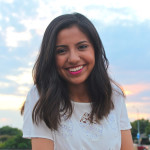 Selena Depaz is a senior journalism major at the University of Texas at Austin. She is currently an intern for Campus Renewal and serves as president of Sigma Phi Lambda. She loves storytelling, Christmas, Frank Sinatra, and adventures.