On a recent Sunday morning bike ride around Town Lake in Austin, Texas, I was lost in thought about recent events, that saw a new President elected in the United States and an eruption of shocking reactive acts.  Never has a Presidential election been so embattled in my memory of Presidential elections, and I was alive during Nixon!  While on my ride, I eventually came to the Longhorn Dam, which backs up the Colorado River forming the lake.  Peering over the bridge, I noticed it was the first time ever, the dam releasing access water from the week’s rainfall.  It got me to thinking about the recent events…yes, the election, sorry!

Before I set out, I was torn between going for the bike ride or heading to go Austin’s City Hall for a rally in support of immigrants, many now feeling their status in this country deeply threatened.  There have been many other rallies of late around the country protesting similar things concerning immigration, racism, police violence, economic policies, loss of jobs, threat to the working class, and so much more.

The water pouring through the release portal, reminded me of the surge and outpouring of emotions I have witnessed lately.  Just as the water level had exceeded the ability for the dam to contain the overflow, creating the need to release water, emotions have peaked for many in our country leaving them with the need for a .release Thus the numerous expressions of protest throughout the country.

Yet, lake levels at times have been strikingly low, revealing downed trees and other dangerous debris lying below the surface, often out of sight. Racism and other forms of marginalization operates the same way, often lying just hidden below the surface in our communities and sometimes within our own hearts.

Racism within the Faith

As a Christian who has worked in ministry for over 20 years, I would like to say that such a state of racial prejudice is due to a world that rejects Christ and God, but the reality is that this same peril exists just as strongly within the Church and within the Christian community, an existence described all too well in Emerson and Smith’s book, Divided by Faith, and reported on by Christianity Today, both detailing racism within Christianity (mainline, Catholic, evangelical, the works!).  The authors note, that Sunday morning is the most divided time within Christianity, when people congregate to faith communities largely represented by people that look like them.

Racism is alive and well within the church, big C or little C.  It is a human thing, a pervasive display of sin.  It is not a God thing, although unfortunately God often takes the rap for it, or just as bad, Satan gets too much credit.  We, in the body of Christ, make decisions, or sometimes worse yet, we don’t make decisions.

I love Austin’s Town Lake.  When the water level is normal, people get to row, canoe, kayak, watch the bats, and enjoy the water, thinking little of any potential risk.  But the local water authorities know better about the potential dangers.  I sometimes….well, quite often…feel that many (me included) in the church, and I am speaking primarily to my white sisters and brothers, approach the body of Christ (well, all of God’s created brothers and sisters), much like we do our weekend excursions to the lake.

We are largely unaware of what lies just below the surface that might pose even a deadly consequence.  Sadly, our culture within the body of Christ and in our interactions with the larger society often reflect this same approach, we show up, do our worship, sing praises, say we will pray for each other, and then go home, often unaware of the situation of life for our sisters and brothers of color.

While racism is often associated with attitudes between individuals, racism is usually defined as a structural condition within communities and institutions in which one group enjoys unearned privilege, over another group.  Dismantling racism in our society is a difficult and complex process that requires an unwavering intentionality.  I would offer that such an intentional process in transforming our faith communities, is required of us, who call ourselves persons of faith, Christians.

I first became aware of this at an InterVarsity Diversity conference in Jackson, MS, back in the late 90’s sponsored by Chris Rice and the late Spencer Perkins, two individuals who committed themselves to a multiracial friendship.  It was not a feel good conference, but a working conference. Difficult questions and difficult answers where shared, and resolution was not achieved.  But a discussion was started, not about whom the ministry was ministering to, but amongst those in the ministry and the structure of the ministry itself around its own internal racism.  It was a bold conference for its day and the location (as reference to so many times throughout the weekend), but it was only a start.  We cannot “just love Jesus” unless we learn to “just love each other” as Jesus would have.

What has been embedded for so many years, does not unravel so quickly, yet as people of faith we move forward in hope, especially in this season of Advent.

Bigotry has reared its ugly head with more confidence in these past few weeks.  We as a people of faith, are called, required, expected, to push back wherever we see it, in society, but first in our ministries, communities, and in our own hearts.  It is expected of all of us, but for those of us who are white, there is a greater imperative.  Bigotry and racism is a sin that hurts EVERYONE. We can’t wait for the waters to crest or dry up before we take notice. 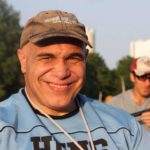 Dr. James Puglisi is the Associate Director of Campus Ministry at St. Edward’s University in Austin, Texas. He received his Bachelor of Arts (1984) from Allegheny College, Meadville, PA in Anthropology of Religions.  He holds a Master of Arts in Higher Education (1996) from Geneva College, Beaver Falls, PA, and a Master of Arts in Applied Theology (2002) from Wheeling Jesuit University.   He was awarded a Doctor of Ministry from Catholic Theological Union (2008) in the area of Practical Theology.  His doctoral writing was titled “Shalom: The Role of Truth Telling in Creating Communities of Racial Reconciliation within Institutions of Christian Higher Education.”  He is actively involved in interfaith and ecumenical work at St. Edward’s University and in the larger Austin Community.  In addition to his work in campus ministry, he teaches courses in the cultural foundations curriculum in the area of migration, culture, and diversity.   He has presented at conferences on racial reconciliation and inter-religious dialogue. He is originally from Pittsburgh, PA.